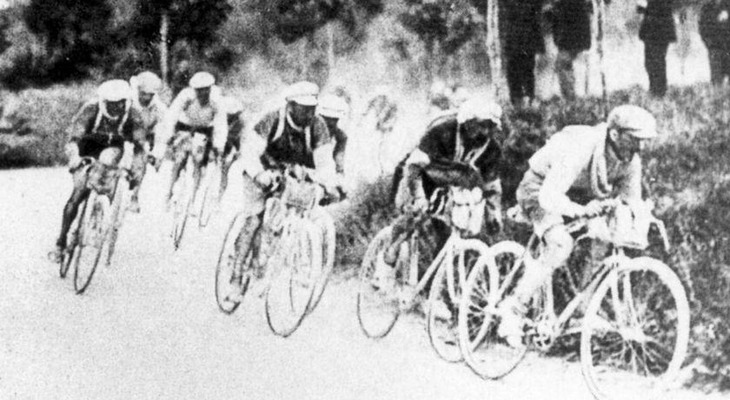 Where champions are born

Heroic memories from the Giro Volume 1

In 1909, Luigi Ganna won the first ever Giro d'Italia. He was the ninth son of two farmers, he had only two years of formal schooling, just enough to be able to sign his own name at the controls. He started working as a child, leaving the fields to work as a bricklayer: 10 hours of work and a 110 km cycle to get there and back. Every single day. The first Giro was tough, Ganna, like many others, had to deal with many vicissitudes. Gerbi and Petit Breton, to mention but two, fell straight away and were forced to pull out. Ganna was struck by bad luck in the Apennine stage from Chieti to Naples. He got four punctures coming down the evil Macerone; at the fourth stop he started to cry. He arrived in Naples in eleventh place, 51 minutes behind Rossignoli; he won that Giro on points rather than on time, as was the case in the following four editions. Giovanni Rossignoli, who would have won the first and third editions, finally triumphed in 1912, the only edition that ranked teams, and during which Atala stood out.

According to Eberardo Pavesi, nicknamed the Avucatt (lawyer),a hero of the time and then a great coach for Legnano during Bartali’s time (and Coppi’s in 1940), "The races were a kind of adventure and we approached them in a flippant bohemian way." The 1914 Giro was the most adventurous and most difficult ever; it was the first one without the points classification: eight very tough stages, especially because of the road conditions and the difficult climb to Sestriere in the first stage. Eighty-one riders set off on the first stage but only 37 were at the start of the second one. In the longest stage, from Lucca to Rome (430 km) Girardengo won but then Azzini dominated, until he literally disappeared at Macerone. He was found in a barn the next day. Then it was Alfonso Calzolari's turn, but it turned out that he had held onto a car; so 3 of the 5 hours he had gained were taken from him. For the UVI it was not enough: Calzolari was removed from the ranking and victory was assigned to Albini. Only eight riders finished the Giro that year, and the Gazzetta and Calzolari got justice in February 1915.

The champion, indeed the first Campionissimo(super-champion) after the war, was Costante Girardengo, winner of the Giro in 1919 and of 7 out of its 10 stages. In 1923 he did even better, 8 partial victories out of 10 and the final ranking, finishing only 37 seconds ahead of climber, Brunero, who had won in '21 and '22. Before the era of Alfredo Binda, who dominated the Giro from 1925, the 1924 Giro was very special. The teams could not agree on reimbursements and prizes with the Gazzetta, so the organization decided that only "isolated"(independent) riders could participate. Their board and lodging were covered by the organization. It was also the only Giro with a female participant. The legend of Alfonsina Strada was born: she was way behind almost from the start but, by popular acclaim, she rode the entire Giro. The popularity of the heroine from Emilia far exceeded that of Giuseppe Enrici, who won the Giro, almost an hour ahead of Federico Gay.