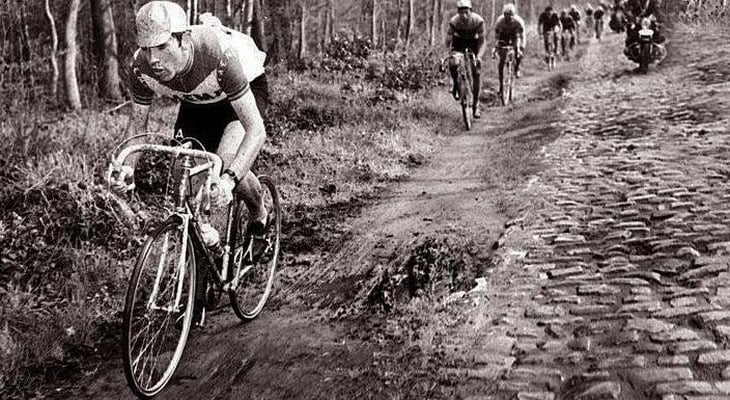 The Irresistible Charm of Hell (the Hell of the North)

When the riders’ wheels meet the cobbles of France you enter another cycling dimension.

What you feel in that patch of land on the border with Flanders cannot be replicated anywhere else. Up there in the north, everything is suspended in time, crystallized over time, immutable. It is a race that has always wandered through the countryside, along cobbled roads that are much more ancient than cycling itself, finishing up in a velodrome that sorted the winners from the losers. Even if this sport has forgotten trackracing today, the Roubaix has remained intact, with its mini-parabolic curves and pre-war showers, a treasure-chest to be preserved: the Paris-Roubaix.

Because, the Roubaix is ​​a rare beast. It was an endangered species even before the first edition. If it were up to Victor Breyer, it would never have taken place. Le Vélosent him to verify the feasibility of a race that would link the capital to the new velodrome built in Roubaix. In February 1896, he pedalled on a twenty-kilo bicycle into a storm, exposed to wind and rain, on "roads that should be banned", to arrive in a "very modest velodrome". He wrote that the very idea of ​​such a race was "to be avoided like the plague". He wrote that it was "dangerous and above all reckless to make cyclists ride on these roads". He wrote many other things. But he never sent the telegram. In the end, he preferred a much simpler "okay for me", basically a green-light to go ahead.

It was already endangered at the first edition that took place on 19 April 1896. The choice to ride on Easter Sunday, enraged the archbishops of Paris and Lille. The organizers worked hard to celebrate a mass at the start and one at the finish line. Fifty-two riders left from the French capital. Only 28 of them (or perhaps 32) made the border with Flanders. Josef Fischer was ahead of the others, but he was in the same sorry shape as the rest of them. The rider from Luxembourg fell once on his own, then because a horse rammed him, and finally when a herd of cows crossing the road knocked him to the ground for the third time. It went worse for the Welshman, Arthur Linton: he ended up with his face on the cobbles six times, crossing the finish line barely conscious. Worse again was Albert Dumas’ experience: he was the last to cross the finish line, twenty hours after Fischer. He took a wrong turn, ending up cycling an extra 100 km, fording a river and escaping from a farmer who wanted to beat him up for having entered his property.

It was still endangered in the second edition, on 18 April 1897. Only 32 riders showed up at the start. But when Maurice Garin, from the Aosta Valley - who won the first Tour de France in history six years later - crossed the finish line and told everyone "this race is madness, it is the most beautiful race I ever ridden", then everyone decided that maybe it wasn't so bad to take part.

It was endangered in the 1970s too. There were fewer cobbled roads and those that resisted modernity were in a state of disrepair. A handful of men of good will decided that the Roubaix could not disappear and they began to repair the sections as an act of love for the race and for cycling in general. Even today, Les Amis de Paris-Roubaixtake care of the cobbles, giving riders the possibility to experience this northern Hell. They call it Hell, because it is a ferocious, infernal struggle. But it is the best Hell you could dream of: a Paradise of passion and bicycles.