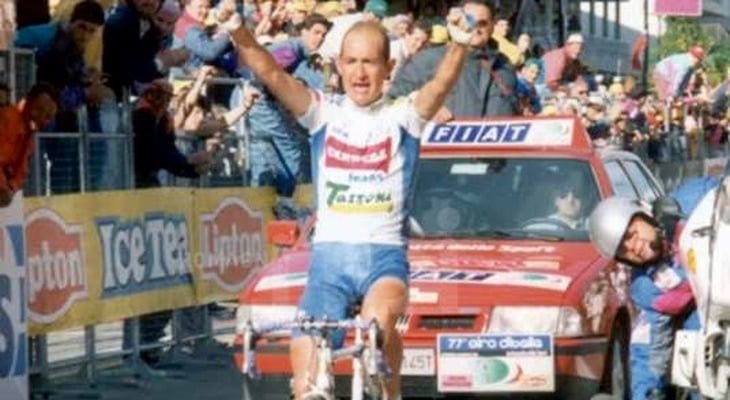 Heroic memories from the Giro Vol. 2

Of victories and legends

Francesco Moser and Giuseppe Saronni marked a high point in the cycling rivalry that has always been the spice of this sport. Both great champions, they were very different from each other and bound not to see eye to eye. Both were great characters, born to ride in their own unique way. Both were great cyclists, but because of their technical characteristics, they did not like the high mountains. The Giro in the 1980s was not so tough, to allow the Italian riders to win and thus keep competition alive and ignite the passion of fans with their genuine rivalry and remarkable personalities. The Giro was often decided in a matter of seconds and bonus points. Saronni won twice, Moser was victorious only in 1984 – at the age of 34 – when he, unbelievably, overtook Fignon during the last stage at the Verona time trial. But soon Bernard Hinault imposed his law, despite the easier climbs. He won three times, accomplishing his most impressive victory in 1980; with Miro Panizza, from Saronni’s GIS team, standing out in the ranking. The final climb that year was the Stelvio: Hinault sent his faithful teammate Bernaudeau ahead, then left everyone behind to go and join him, before leaving him to win the stage in Bormio.

The Giro d’Italia 1988 was decided in Bormio too. The arrival in Bormio was up the Gavia instead of its very different twin, the Stelvio. There was a generational change that year, with no stars at the start. A certain Pedro Delgado was there but, as he would soon demonstrate, he was preparing for the Tour. Franco Chioccioli, a Tuscan rider, who would remind you of Coppi, was amongst the front-runners. A solid climber, Chioccioli dominated in Campitello Matese and wore the pink jersey on the Selvino. On 5 June, however, during the Gavia stage, Torriani announced bad weather. Not many riders heeded the forecasts but reality was worse than they could have imagined; on a road with several unpaved segments, a storm broke and many riders failed to protect themselves from the snow and cold. Dutch rider, Van der Velde, in short sleeves, was first to the top but he disappeared soon after. From 2,652 m up the Gavia pass to the bottom of the valley, there was a 25 km descent, terrible in those conditions. The smartest riders, and the ones best protected from the cold, were Andy Hampstean, from the United States, and Erik Breukink from the Netherlands, who won the stage and was second in the overall ranking. Hampstean is the only American to date to have won the Giro.

The enthusiasm of Giro followers was awoken once again for Gianni Bugno, who dominated in 1990 but whose immense class and talent never really shone through. For his unique style and passion, Marco Pantani become the new hero. Instead of recalling his win at the Giro of '98 and the following year - which he dominated until the tragedy of Madonna di Campiglio – let’s remember 1994, during which the great climber from Romagna first came to the fore.

The Russian Berzin won that edition – the highlight of his career – and a reflection of the cycling of the time. But history tells us about the exhilarating advent of this young man – the last traces of hair on his head – who became protagonist of two extraordinary and irreverent actions. He won in Merano, coming out at the end of the last climb and showing off on the descent. He repeated his success the next day at the Merano-Aprica stage. Evgeni Berzin and his majesty Miguel Indurain (who won the previous two Giros and five Tours in his time) competed for victory. But Pantani also dominated the Santa Cristina, almost overturning the final result and coming just short of a place on the podium between Berzin and the monumental Spaniard.